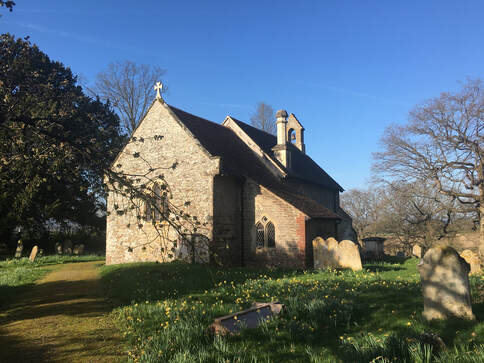 ​There was a medieval church which is said to have had a wooden turret at Egdean, but it had fallen down by the time of the Reformation.  St Bartholomew’s Church,as we know it, is fairly unusual for Sussex churches because it was built in the 17th century; most of our rural churches date from the 10th to 12th centuries. The church is Grade II listed.

The church was rebuilt in 1622 and is of brick and greenish-tinted sandstone; around the church are buttresses partly of stone and partly of brick.  It has a western bellcote containing one bell.   The chancel is of a substantial size, the length of which may suggest re-use of the medieval foundations; it has a wide-spanned round-headed arch of brick emerging from the side-walls with rough-cut niches on either end of the arch (what were they for?). The date 1623 is cut in to the west chancel tie beam. Except one tie-beam dated 1889, the roof is original. The church is entered through a C17 studded oak door, the doorway has a brick (from the brick kiln at Ebernoe?) four-centred arch and spindly hood-mould showing it has been built in the same idiom as the early C17 manor houses around Petworth.

The only surviving C17 window is a small one in the west gable depicting St. Bartholomew with a flaying (skinning) knife reminding us of how he was martyred. Windows in the chancel have brick arches.  The lancet-like lower west window is definitely pre-C19, but may have been altered.  The original windows in their C17 embrasures have been replaced by Victorian stone Gothic mouldings.

The church was extensively altered in the C19, especially outside, starting with a stone belfry.  In 1885 the south porch was added, timber above stone plinth walls, followed by a lean-to north vestry in 1898 at a cost of £70.  Finally, in 1928, the east window was redesigned matching those to the west.

The stone octagonal font is thought to date from the early C17.  The sturdy oak communion rail with a square billeted top also dates from this time.  The pews are made of light oak and have only been in the church since 1969, replacing the pitch-pine ones that were there previously.  The electric chamber organ is in an oak case and was built by JW Walker and Sons in 1972.  The church has the modern day benefit of electricity but does not have a mains water supply.

The earliest register dates from the year 1630.  The patronage was transferred in 1911; the Bishop of Chichester is now the patron.  St. Bartholomew’s was part of Midhurst Rural Deanery until 1913 when it became part of Petworth Deanery.